Is the postcode dead? 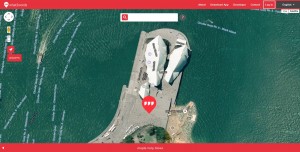 London-based start-up what3words (w3w) has devised a new addressing system.  The system divides the entire world into a grid of 3m by 3m squares — 57 trillion of them in total. Each square has been labelled with a three word sequence. Although GPS services can already accurately pinpoint any location on earth, the w3w system provides a three-word code that makes it easier to remember and communicate with people over using complicated latitude and longitude coördinates.

Standing on the steps of the Sydney Opera House? You are at “maple.help.blows”. Want to direct someone to the table you are sitting at in the Brisbane City Botanical Gardens? Tell them to proceed to “preoccupied.horn.onions”. Climb to the top of Mount Everest. That is “ablaze.newsstand.unattactive”

The system provides a more accurate alternative to the current postcode, street and street number combination. With some publications questioning if it is the end of the post code. While the w3w system can overcome small location problems in western countries, such a directing a courier to a back door down an obscure lane, the ideal application is in those countries with inadequate addressing systems.

w3w claim “Around 75{1897c8b751ad578bd9a969480021909bcd327853590acbf66d5abd5e194cce96} of the world (135 countries) suffers from inconsistent, complicated or inadequate addressing systems. This means that around 4 billion people are invisible; unable to report crime; unable to get deliveries or receive aid; and unable to exercise many of their rights as citizens because they simply have no way to communicate where they live.”

“For example, it means that in remote locations water facilities can’t be found, monitored and fixed; and schools, refugee camps and informal settlements remain unaddressed.”

The system provides everyone and everywhere with an easy to remember three word address. These three words can be in their native language.

In western countries, we cannot see the w3w system gaining large popularity or acceptance for a number of reasons.

The current address system of postcode, street and street number combination is used everywhere to identify your location. A person’s details held on file and in IT systems expect the address to be in this format. These systems normally expect you to have a single residential address. Under the w3w system you could have 20, 30, 40… valid addresses depending on the size of your home and surrounding land.

Enhancing these systems and processes to include additional fields to hold the w3w three word address would be a significant undertaking.

Humans naturally want to group and categorise things. It is how we simplify and understand complexity. The w3w system provides no hierarchy in their naming convention. It is just random word combinations assigned to each 3m by 3m square. We think this is a great detractor to the w3w system. The system could have easily provided a hierarchy to the words used to identify a square.

Each of these levels would then be assigned a word to give a 3 level hierarchy. Such as:

If a courier had a delivery to w3w addresses: “part.vibe.sand”  and “scam.fims.starts”. The courier has no idea if those locations are on the same street (they are), or the same suburb or even the same country.  They would have to use the w3w app to determine this.

However, if the proposed hierarchy was in place and the courier had a delivery to “part.vibe.sand” and “part.vibe.radar”, they would know these addresses are within 300m of each other.

When you are dealing with spatially models, much of the time is spent examining areas (i.e. planning zones).  Typically you are not interested in a specific building/location. It is more likely you want to look at what type of buildings are in an area or locate the community facilities in a neighbourhood. Suburbs (postcode) and streets gives this hierarchy to categorise and search on.  The w3w address does not.

While it may not be such an issue for a single home on an individual property, it does complicate the residential addresses of people residing in buildings containing multiple apartments/units.   You could have one person living on the northern side of an apartment complex that determine their address is “Unit 502, Level 5, reach.wished.clues”. Another person living on the southern side of the building determines their address is “Unit 605, Level 6, doing.lion.spin”. Again looking at these addresses, unless you used the w3w app, you would not be able to determine they are in the same building. If there was a guideline stating the three word address is the square that contains the front door of the building, then these people would have nominated the addresses of:  “Unit 502, Level 5, wage.brush.lofts” and “Unit 605, Level 6, wage.brush.lofts”.  Now it is obvious those two people are residing in the same building.

Finding the geolocation for an address is a core function in most spatial systems.  To provide this function for three word addresses requires interfacing with the w3w Application Programming Interface (API). This requirement makes these spatial systems dependent on the w3w IT infrastructure.

Should a cyber-criminal decide to target w3w or there is a catastrophic failure of one or more components of w3w infrastructure, the API could not be available for hours, or even days. The geolocation function would stop working during this time. With some systems, such a failure would severely impact on the use of the system. This could cause financial loss and damage to the reputations of those organisations using these systems.

End of the postcode?

Certainly the w3w addressing system has applications in the courier/transport industry. We cannot see much appeal for individuals to use the w3w address to provide their location to other people. All mapping applications (such as google maps) allow you to share your location removing the need to for you to work out latitude and longitude coordinates.

Given the above reasons, in western countries, we do not think three word addresses will be generally accepted as an alternative to the postcode, street and street number address combination, despite the limitations in using this address.

Is it the end of the postcode? Not yet.

Will Sizztech enhance Forecaz Modeller to support w3w addressing? There are no plans to because of the reasons given above.